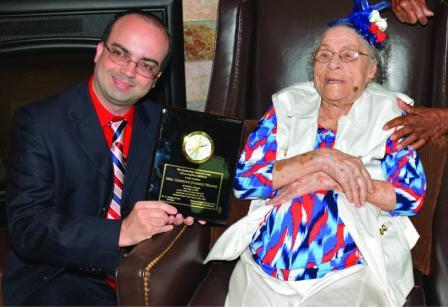 July 4, 2014; The Gerontology Research Group of Los Angeles, California has awarded Mrs. Gertrude Weaver, 116, the title of ôOldest Living American,ö retroactive to December 17, 2012, when Dina Manfredini of Iowa passed away at age 115. Jeralean Talley, 115, of Inkster, Michigan, was previously thought to be the titleholder. Robert Young and Mark Muir were honored to be present for her 116th birthday celebration. Robert Young had the honor of awarding Ms. Weaver the ôOldest Living Americanö title.

For more information about this announcement, please click here. 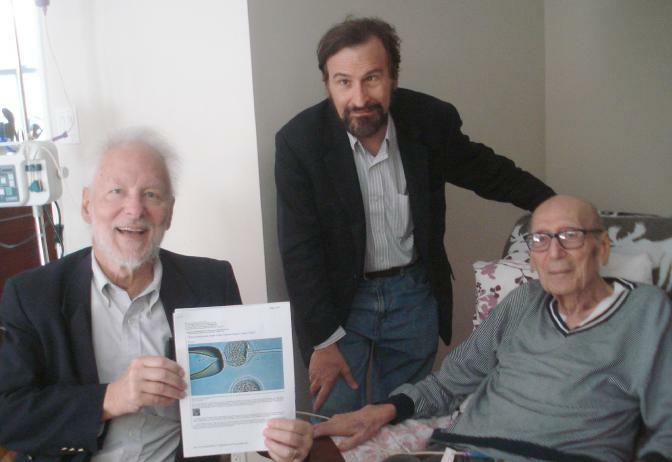 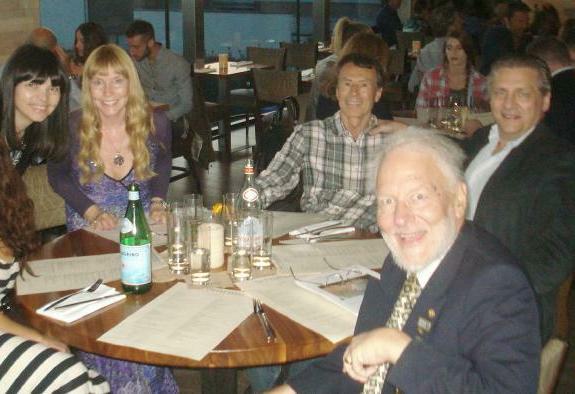 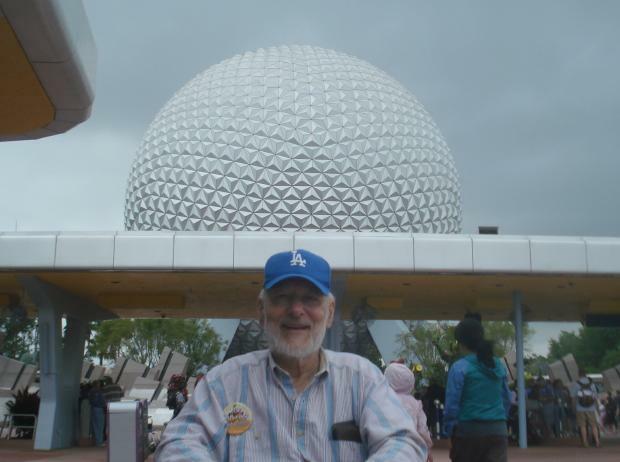 "Dr. Coles Gives the Distinguished Lecture on Supercentenarians at the Florida Hospital in Orlando, FL 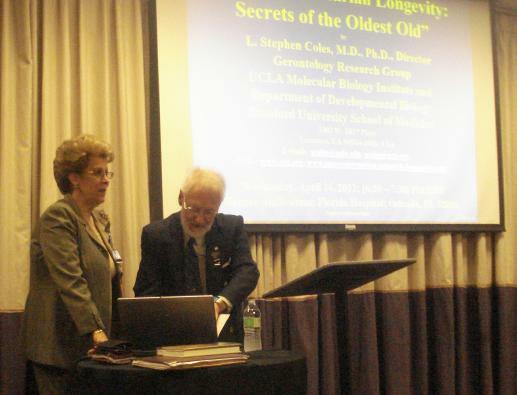 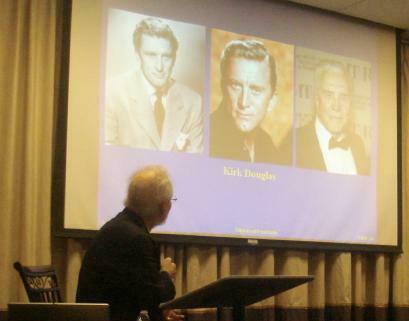 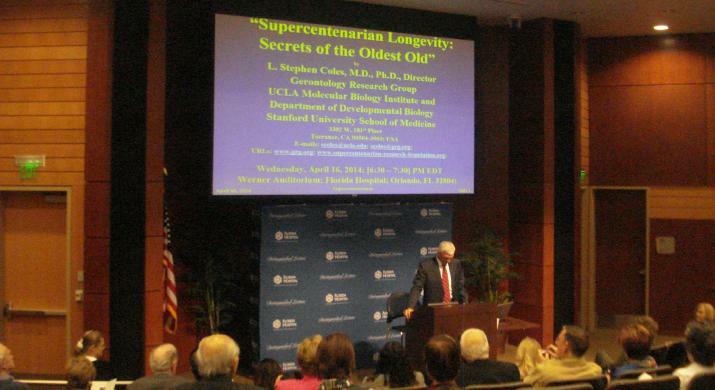 Thursday, April 16, 2014; 10:00 AM (two hours) and 6:30 PM (one hour) EDT; Dr. L. Stephen Coles gave the April Distinguished Lecture on Aging at the Florida Hospital in Orlando, FL at the invitation of Dr. Antonio Novello, M.D., former US Surgeon General. 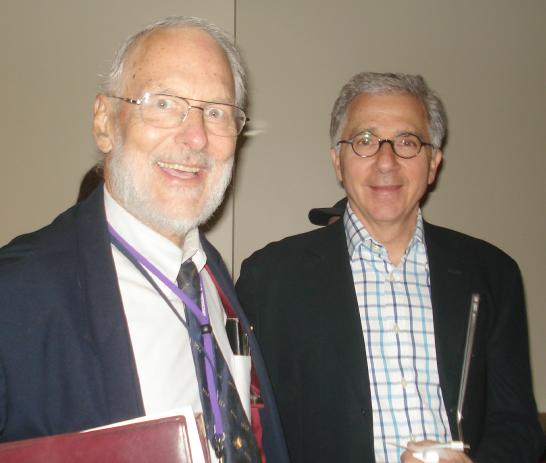 Wednesday, April 9, 2014; Noon; Prof. Douglas Melton, Ph.D., Director, Harvard Stem Cell Institute, Xander University Professor at Harvard, Member of the National Academy of Sciences and the Institute of Medicine, spoke on the topic of "Making Pancreatic Beta Cells." He showed that hiPSC's can make Islet Beta Cells today in his lab at the billion cells espansion after years of frustrating blind alleys and false-start hypotheses. One original idea that came out of the Q&A session that may impact the organ transplantation/rejection problem is the use of an HLA protein known to protect embryos/fetuses from the Mothers' immune system that might be used to make xenographic organ transplants appear to have the same protection as fetuses by coating foreign tissue with this type of HLA protein. A curious factoid during the lecture was that if there were no apoptotic Programmed Cell Death in the tissues containing our replicative cells and they continued to divide at their normal rates, the volume of our future bodies would be the equivalent of 70 Earths after one year of incredible exponential expansion. So, thank goodness for cell turnover and the recycling of old, senescent cells. Of course, we need to examine the consequences of keeping lots of senescent cells around as they age (that consume oxygen and nutrients without making a contribution to the tissue function, in those tissues in which they are embedded, as they may have once done) in older tissues without having them be recycled and replaced by fresh cells. 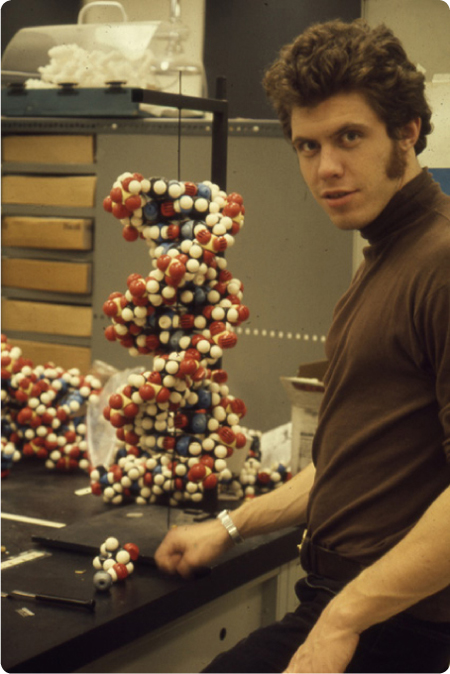 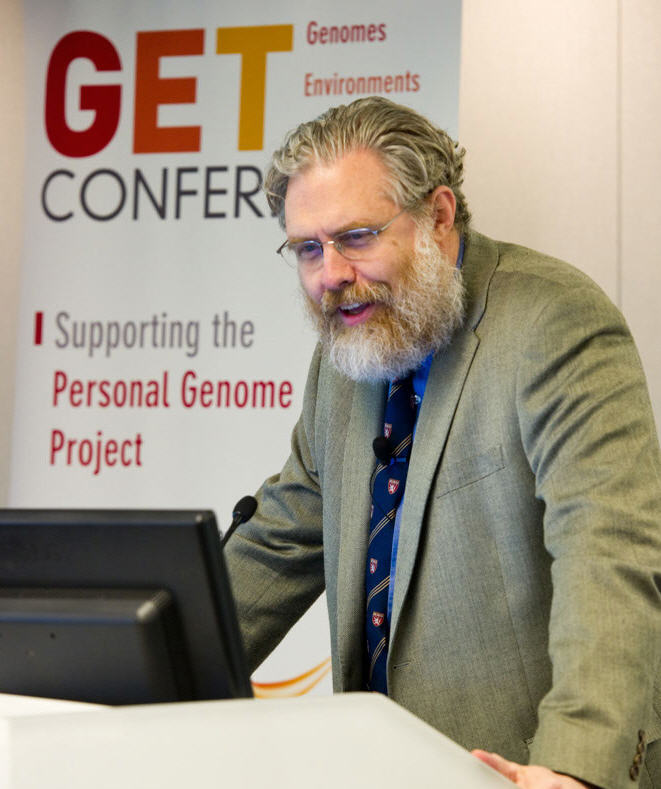 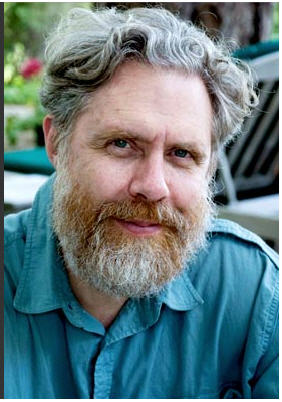 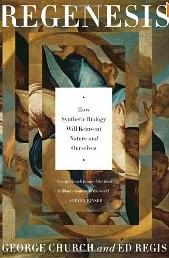 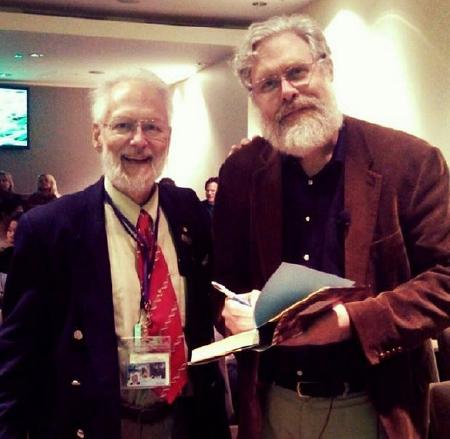 Wednesday, March 26, 2014; [Noon - 1:00 PM] PDT; Geneticist Prof. George Church of Harvard University spoke to a full auditorium at today's UCLA IMED Noon Seminar on the topic of "Technologies for Reading and Writing Genomes." In particular, he spoke about CRISPER/Cas9 technology as well as the new BRAIN Initiative which he helped initiate with his early Neuron paper, Vol. 74 (November 21, 2012) that led to President Obama's announcing it in his 2013 "State of the Union Address" as a Grand Challenge." Finally, he intimated that they were collaborating with a commercial venture from Miami, FL on the complete sequencing of 30 Supercentenarians, while showing a slide of Madam Jeanne Calment smoking a cigarette.

"Doctor Performs Autopsy on U.S. Retirement System: The Likely Cause of Death: 'Failure To Raise the Retirement Age,'" 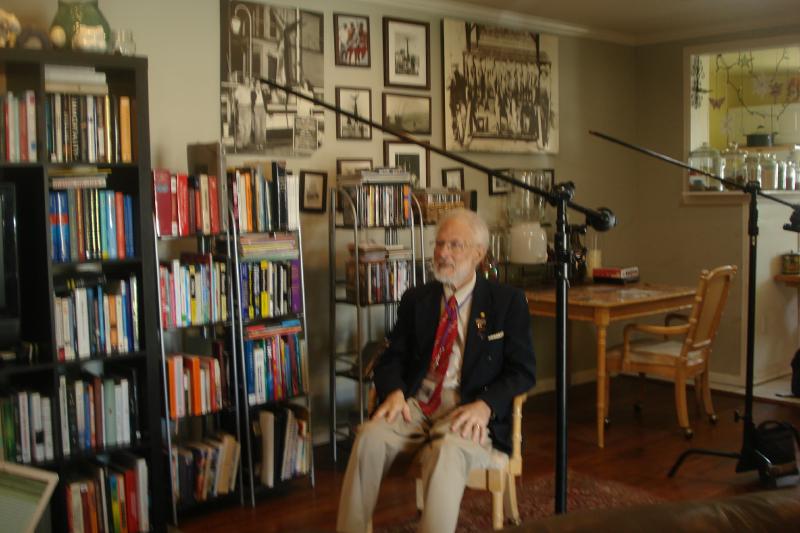 Saturday, March 15, 2014; [2:00 - 5:00] PM PDT; Dr. Stephen Coles was interviewed by CNN Reporter Alan Duke concerning a Monk who claimed to be 122 yo. This claim is now being investigated by the GRG (that has a history of skepticism regarding extreme longevity claims). Our Monk died last year, but not before he was interviewed by two experts who prepared a lengthy video documentary for the occasion. 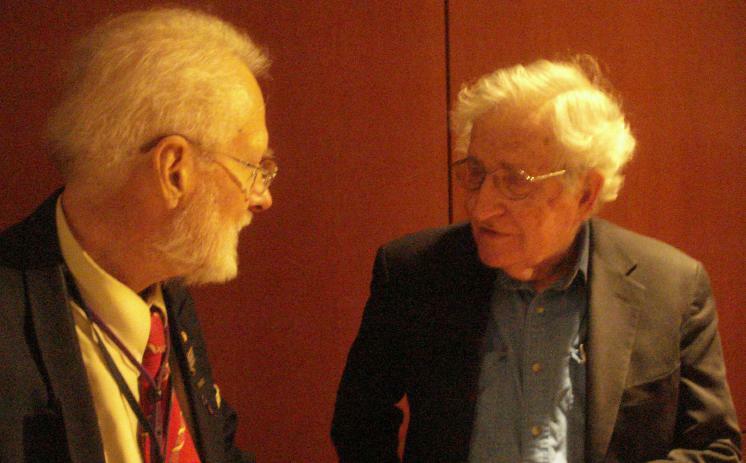 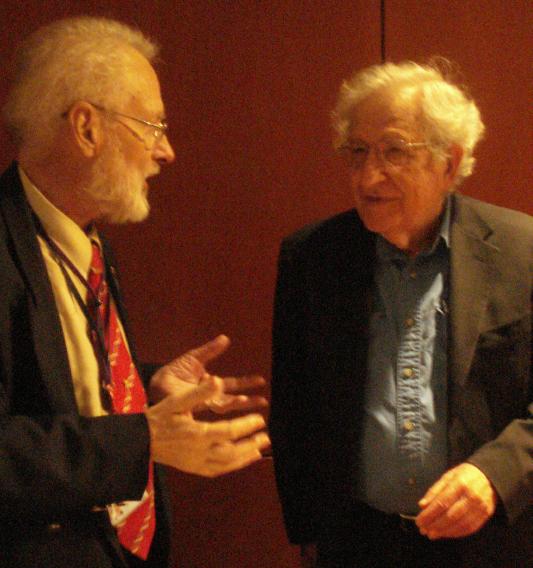 Friday, March 14, 2014; [Noon - 1:00 PM] PDT; Emeritus Prof. Noam Chomsky of MIT lectured at UCLA about the state of the world. As a computational linguist, he is most noted as the father of Transformational Grammar which he created back in 1965 but now mostly as a Left- Wing anti-war protester against both Democratic and Republican Administrations. 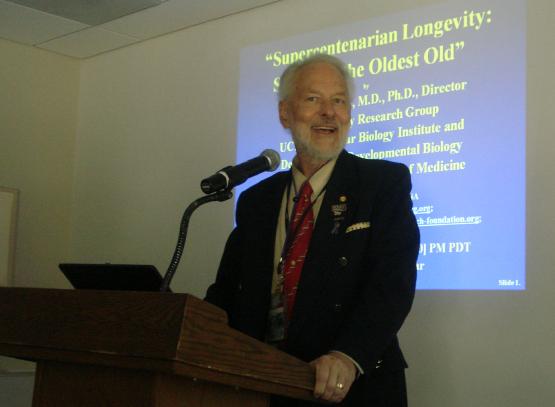 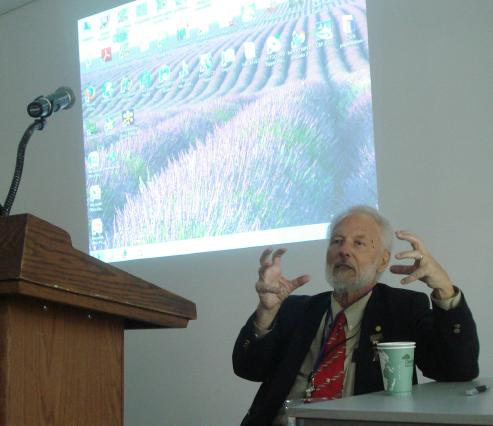 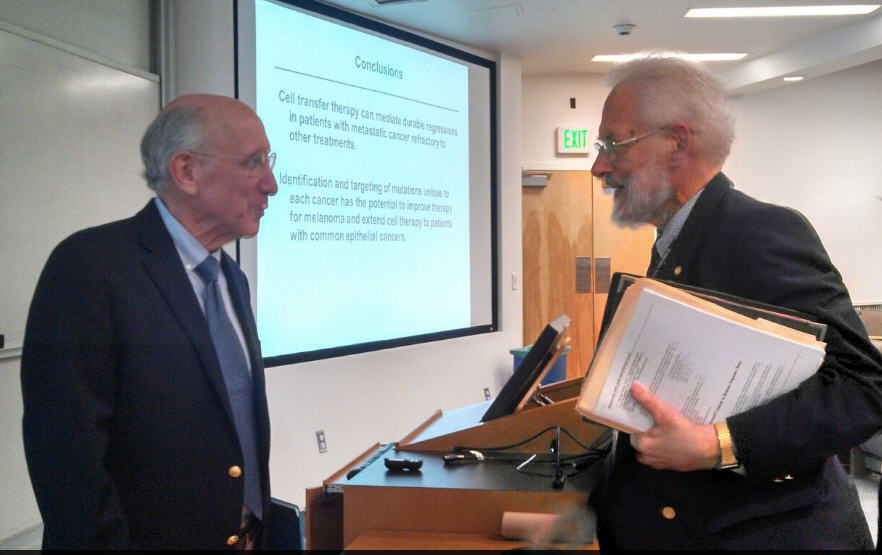 Thursday, March 6, 2014; 12:00 Noon; Dr. Steven A. Rosenberg, M.D., Ph.D., Chief of the Surgery Branch of the NCI at NIH in Bethesda, MD spoke on the "Curative Potential of T-Cell Immunotherapy for Cancer" to a packed audience with students sitting on the floor in CHS 73-105. Tumor sequences are now know to contain an average of 234 mutations. About 25 mutations don't even fit into a pattern, but are unique to each patient. The support for this new cutting-edge data will appear soon in The Journal of Clinical Investigation. 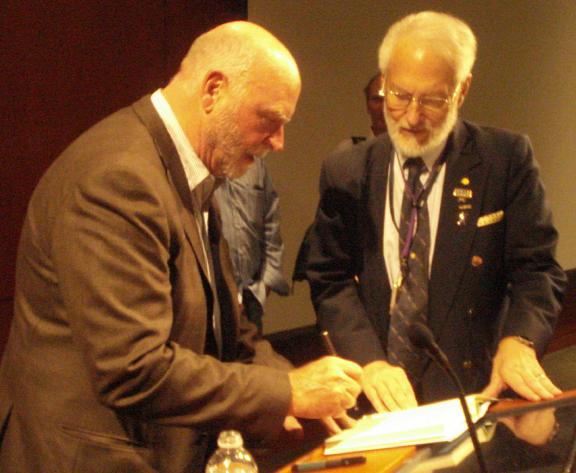 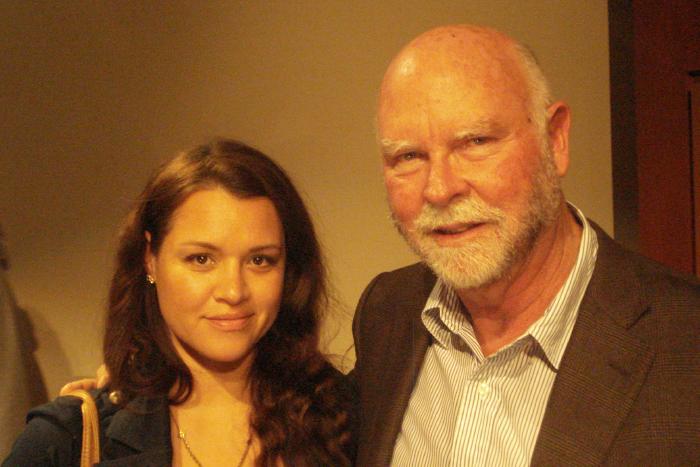 Wednesday, February 26, 2014; 12:30 PM; Dr. J. Criag Venter gave the weekly IMED Seminar at UCLA on the topic of his book "Life at the Speed of Light." He also mentioned that [30 - 40] percent of all the essential genes identified in the human genome [those whose knock-outs are lethal] have an unknown function. He also mentioned that the human biome contains 10,000 unique bacterial genes (in addition to the 20,000 human genes we know about) that are activated by the food we eat. Many of the protein gene products cross the BBB. 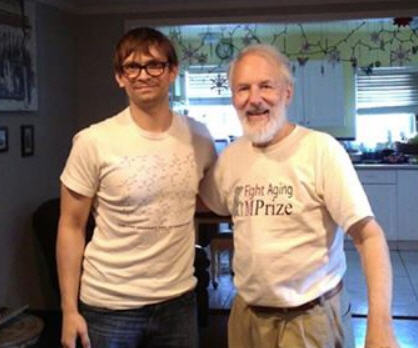 January 15, 2014; 2:30 PM; Dr. Alex Zhavornonkov and Dmitry Kamensky, a wealthy Russian banker who recently funded a Biology of Aging Laboratory at the Moscow Institute of Physics and Technology (MIPT) visited Los Angeles on their way from Hong Kong and then on their way to Johns Hopkins Medical School in Baltimore, MD. They neglected to update their calendars, having crossed the International Date Line, and got to visit me at UCLA one day earlier than planned! - - Steve Coles