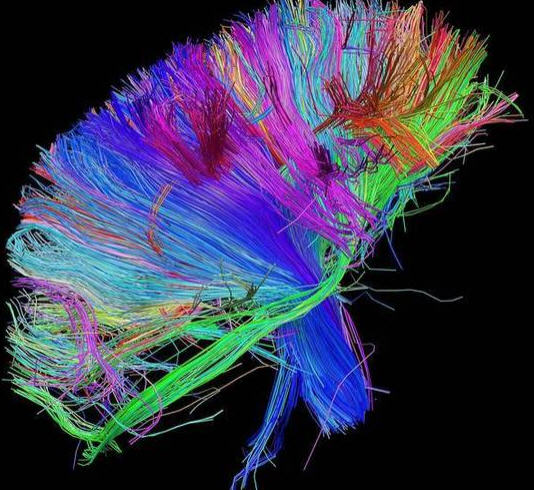 Sunday, March 17, 2013; Click for details of a A brain scan of white matter fibers, color-coded by direction.
(Courtesy of the Laboratory of Neuro Imaging at UCLA and Martinos Center for Biomedical Imaging at MGH September 5, 2012)

August 1, 2012; Click for three PBS-TV videos by Ray Kurzweil on the prospect for immortality in our life times.. . . .

Here are the 27 elements that compose the human body taken from The Periodic Table in order of descending body weight (our cosmic recipe derived from star dust) [1,2]. For interest, elements that are toxic have been added in the next section.

Note: Plutonium and uranium are both heavy metals, and thus are toxic due to chemical effects, but not more so than all other heavy metals. However, if we consider only chemical effects, radon doesn't belong on the list, since it is an inert noble gas, and thus is harmful only because it's radioactive. (Also, radium and polonium, which are mentioned, are harmful mostly because of their radioactivity.) If it is meant to include the effect of radioactivity, there are elements whose common isotopes are far worse than plutonium or uranium (in some cases by several orders of magnitude). Some of these are also more radioactive than radium, polonium, or radon, which in turn are more radioactive than plutonium and uranium. - - Donald Gennery, Biostatistics, JPL; Pasadena, CA (August 7, 2013)

Compounds: Both fiber glass and asbestos insulation are highly toxic (and complex) compounds when inhaled due to the physical dimensions of the fibers when they get lodged in the lungs. Poisonous mushrooms, belladonna (deadly nightshade, atropine), and extremely minute amounts of LSD when swallowed have caused many deaths. But so has alcohol (wood alcohol [methanol] as well as pure ethanol, as in wine, beer, and liquor) and nicotine (in tobacco). Even too much water can lead to water intoxication. Castor beans (Ricin) and Anthrax, likewise. Poison gas (phosgene) was used in chemical warfare heavily in WW-1.

The third most common atom in the human body, hydrogen, was created shortly after the time of the "Big Bang" and was not synthesized and blown out in supernovas as so-called "star dust" for the heavy elements. If there are question marks (?) in the Wikipedia Tables referenced below [3-5], this indicates that nobody knows, not that Wikipedia doesn't know.
3. Abundance of elements in the human body
4. Composition of elements in the human body
5. Minerals
6. Plutonium is less toxic than arsenic in terms of being a metallic poison, so breathing plutonium dust will not normally deliver a toxic dose, but of course it's not the metal that will do most damage; it's the radiation. A large dose of a uranium salt will cause vomiting and diarrhea but again it's not as dangerous as consuming arsenic. I assume breathing uranium dust would again not deliver a fatal dose, but you never know with the lungs because there are some metals which breathed-in cause chronic illnesses such as beryllium and manganese.
-- John Emsley. (johnemsley38@aol.com) August 9, 2013