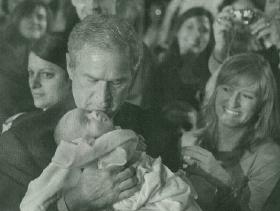 May 25, 2005; Washington, D.C. Trey and Tracy were one of 21 families invited to the White House among those who delivered babies from embryos that were donated by another family that created them for the purposes of IVF but were never needed after being frozen in liquid Nitrogen. Normally, following ovarian hyperstimulation, there would be a surplus of fertilized eggs, since a woman who creates a dozen eggs or more eggs would never have more than three of four placed back into the uterus. The surplus eggs are frozen for safekeeping just in case the pregnancy doesn't take on that particular round of IVF. Thawed eggs could be used in future rounds of IVF that would be much less expensive than starting from scratch. These adopted embryos are now being called "snowflake" babies, since after they were thawed, they could be implanted in a genetically-unrelated surrogate mother and brought to term.

Snowflake infants highlight the human potential of the in vitro fertilization (IVF) industry's vast and growing pool of spare fertilized eggs.
So what is our opinion of this photo-op? We categorically repudiate this photo. Here follows a random list (not even alphabetical) of adjectives that one could use to describe the motives of those who conceived of this slick masquerade photo as a scam...

But, why this long string of invectives to describe something that superficially looks so innocent as a 'politician hugging a baby'? Because this photo is a contrived sham and swindle. Don't get me wrong. We wish to make it perfectly clear that we have nothing against snow-flake, adopted embryos per se. After all, babies are babies. And, our agenda is neither pronatalist nor anti-natalist. To the contrary, we consider IVF to be a rather cool technology, and frozen embryos in a surrogate mother is a particularly sweet variation on the basic technology. But here are some facts from Prof. Arthur L. Caplan, Ph.D., Emanuel and Robert Hart Professor of Bioethics and Director of the Center for Bioethics at the University of Pennsylvania in Philadelphia. He explains that there were only 81 snowflake babies ever born in history, of which 21 were assembled at the White House on this particular day. But what is the total number of frozen embryos sitting now in liquid Nitrogen in IVF clinics around the country accumulated for more than fifteen years? Answer: Approximately 400,000 frozen embryos! So what is the ratio of 81 to 400,000? Let's figure it out. It's not, as the photo is disingenuously meant to suggest "This is the American way --- representative of how things should be done in our nice clean-living land in which all sons are handsome and all daughters are beautiful (and are never caught drinking under age)." Indeed, snowflakes do not represent the typical case, nor the majority, they merely are a singular existence proof that it's possible. We are not off by a factor of 10 (20 percent) or a factor of 100 (2 percent) or a factor of 1,000 (0.2 percent) but a factor of 10,000 (0.02 percent), i.e., snowflakes are four orders of magnitude off the norm! This is like holding up a red herring and saying, look here, see, "all herrings are red!" Or holding up a black swan and saying, see, "all swans are black!" Hello! This contrived photo-op for the benefit of the media was orchestrated as a fantasy for evangelical conservatives. Did the media notice? Yes, they did. Two days later The Los Angeles Times [4] wrote a sarcastic Editorial exposing this hypocrisy by a President whose wife admits that he can't pronounce the word nuclear, even though she can. In his defense, his staff explained that "saying nookular" [sic] is simply a "regionalism," and other presidents have said it that way too (e.g., President Carter), so it must be right. (Sigh!) [We apologize for the ad homonym argument which has nothing to do with the issue at hand. Furthermore, consider that it doesn't matter whether the President himself is smart or stupid. He is a coached by an extremely bright team (with a hidden agenda), capable of profound calculation, and if you want to go up against him, you better marshal you forces to deal with his adversarial team, and it doesn't matter if you can win one debate after another one-on-one, if you still lose the war. Debates don't count. In this country, the war is over who gets elected. And persuading the electorate is an exquisitely complex business, filled with the task of pandering to irrational delusions held sacred by ordinary people who go to church every Sunday without fail.]

We should also point out that the frozen embryos are the ones that didn't look excellent to the infertility-gynecologist's eye under the microscope, while some of the good-looking ones were implanted back in the IVF-mother-to-be, so one could not imagine that the frozen ones, that are no longer fresh, would have the same yield [percentage of healthy babies going to term] for two reasons: (1) they didn't look as good to start with; and (2) they were subjected to the stresses of freezing and thawing (we don't know which is worse, but you've got both insults working here).

Finally, hardly anyone ever mentions that 50 percent of all fertilized eggs die (of natural causes, usually uncovered after the fact to be at the chromosomal level with ectopic chromosomes, inverted-segment chromosomes, or polyploidy whose incidence increases exponentially with the age of the mother after age 25 and less rapidly with the age of the father) even before they implant in the miraculous, natural womb (meaning that God is ruthlessly indifferent as to this quality-control aspect of producing successors to carry on in the next generation; and He is really profligate in the case of other species and their chances for individuals in a particular cohort to reach reproductive maturity, like frogs, for example, in comparison with humans). For every child born, and then some, the mother-to-be has her monthly period, never realizing that she just "murdered a human child" (God's 'will' be done), while she goes on about her business without the slightest pang of personal guilt (or even being stigmatized as a sinful killer by the elders of the church hierarchy).

So what does this all mean? Simply, that this photograph is a lie -- not just a an innocent, unintentional, counterfactual statement -- it's a deliberate falsehood of sneaky disinformation with full intent to deceive, consistent with an absolutely repulsive political agenda -- " this country has a mandate, indeed an obligation, to adopt all 400,000 of these frozen embryos and bring them to term as wonderful American citizens." (Gasp!) Such a logical conclusion is rightfully incomprehensible, once you make it explicit in writing, even forgetting the monetary cost of carrying out such an absurdity.

Parting Blast: Staging this photo-op with the 21 families with Christian mothers wearing T-shirts emblazoned with slogans like " This embryo was not discarded," was quite a coup for the White House staff, we imagine, and one might reasonably ask who paid for their travel expenses? Was it The Nightlife Christian Adoption Agency by any chance?