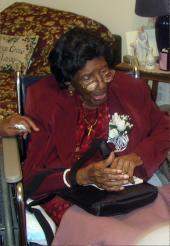 Tuesday, January 31, 2006; The ironically-named Robert "Young" spends an inordinate amount of time with the "very old." Young, 31, a Georgia State University student, researches Supercentenarians -- persons 110 and older - for The Guinness World Records and for gerontology research centers. His specialty is confirming or disproving claims of advanced age from around the world.

Robert Young a student at Georgia State University; he works with The Guinness Book of World Records to research the authenticity of people who claim to be Supercentenarians, including Maria Esther Capovilla of Ecuador, behind on screen, who is the Oldest Certified Living Person at 116 years old.

Young has met several of the oldest people on the planet, including Bettie Wilson of Mississippi and Susie Gibson of Alabama, both 115, and World-War-I Veteran Moses Hardy of Mississippi, who turned 113 this month.

"It's a very elite group," says Young, who lives in Atlanta. "Only about 1 American in 5 million lives to be 110," he says. Young says it's a "statistical fluke" that four of the ten people recognized as the world's oldest -- Wilson, Gibson, Hardy, and 115-year-old Lizzie Bolden of Memphis, TN -- live in the Southeastern USA. Just a few years ago, the three oldest persons in the world lived in JAPAN.

The secret to a long life is not so much where you're from as who you're from, he says. It's in the genes. People who live a very long time tend to come from family trees with many rings. For example, Gibson's mother lived to be 104. The maximum lifespan today is believed to be about 120.

Young examines Baptismal Records, Census Reports, newspaper clippings, and any other paperwork he can find to authenticate or disprove claims. "Errors on Birth Records or intentional deception to avoid military service or collect pension funds can result in false information about people's ages," Young said.

Some Vital, Some Not So

But he's interested not only in how long people live but also in how they live. He's hoping to help find how people can live longer and better. "The condition of Supercentenarians varies tremendously," he said. "Some are unaware of their surroundings and unable to do anything for themselves. Others are alert and engaged." "At 115, Wilson, the daughter of slaves, still reads a newspaper to keep up with current events," he says.

This Far by Faith

Both Wilson and Gibson read the Bible regularly. "The spiritual belief is strong in a lot of these people's lives," he said. Young is not sure he would want to live to be 110. "I met one lady and felt it wasn't worth it," he said. "It just depends on the individual. Some people are living on their own to 105 or 110.

Young calls his field Demographic Gerontology -- combining numeric studies of population groups with research on old age. He's a fount of facts, such as that Sweden was the first nation to institute compulsory birth registration in 1749 and that Britain began universal birth registration in 1837. In many countries, files are still incomplete.

Although the births of many African-Americans and some white people were not recorded for years, "records in the United States were more or less complete by 1933," he says. What is now Young's life's work started as a hobby. He was fascinated by the longevity of the world's oldest people, as cited by Guinness, and impressed by reports of a study on centenarians by the University of Georgia.

Young hopes eventually to acquire graduate degrees and teach gerontology at the university level. A few years ago, that seemed very unlikely. He spent much of his youth in a single-parent household with his Mother and four Siblings. "We were so poor, a trip to McDonald's once a year was considered a treat," he says.

After a two-year stint living with his father in Florida, he returned to Atlanta on a one-way ticket in 1997, walked from the airport to Forest Park and got jobs at Kroger and Pizza Hut. He entered Georgia Perimeter College part-time in 1999. About the same time, he joined The Gerontology Research Group, which had just begun tracking the world's oldest people. He worked first as a volunteer, then, as he began networking with other people in the field, started to get paid for some of his work.

A Conduit of Inspiration

The group was formed in 1990 by researchers from different disciplines who shared a common interest in aging. "It's one of the deepest mysteries science has ever tried to grapple with," said Dr. L. Stephen Coles, M.D., a Co-Founder of the Group. If scientists can understand why Supercentenarians live so long, they may be able to discover more about the aging process," said Coles, who is affiliated with the David Geffen School of Medicine at UCLA.

In 2002, Young began work with Jerry Friedman on Friedman's book, " Earth's Elders: The Wisdom of the World's Oldest People>," released in September 2005. "It was primarily because of him I was able to do this book," Friedman says. Young helped him "find and document the elders in the book," he said.

Young plans to finish Georgia State in May with a Bachelor's in History to be followed by a Certificate in Gerontology. His interest in history fits well with his commitment to the study of Supercentenarians. After all, they've lived through a lot of it. Some have beaten incredible odds from Nazi occupation to the atomic bombing of Hiroshima. "When I read these stories, my human spirit is uplifted," Young says. "Thus, my real goals are education and inspiration."

a. Stay Lean and Healthy;

c. Pick Your Parents Wisely. Much of how well we age seems to be genetic.

AGING BY THE NUMBERS:

About ~50: People in human history documented to have reached the age of 114 yo.

The Oldest -- from Georgia to ECUADOR:

Happy Birthday, Dr. Denmark, M.D.: The currently-known oldest metro- Atlantan is Dr. Leila Denmark, M.D., who practiced pediatric medicine until after her 100th birthday and will turn 108 on Wednesday.

Georgia's Elders: Alberta Davis of Thomson claims to be 124, but so far Robert Young's investigation indicates she could be as young as 109. Eliza Bazemore of Savannah may be either 114 or 115, and Anne Christopher of Rome is probably 109 or 110.

Today's World's Oldest: Ecuadoran Sra. Maria Capovilla is believed to be the World's Oldest Person. Her birth was recorded in the Baptismal Book of her Catholic Church as "September 14, 1889."

All-Time World Record Holder: The longest living person in the world with the documentation to prove it was Madam Jeanne-Louise Calment of France. She died in 1997 at age 122 1/2.

[ Editor's Note: Therefore, as these numbers reveal, Americans have experienced an extraordinary 50 percent increase over the past century in average life expectancy. (Note, importantly, that there has been no comparable increase in maximum lifespan, so what we have really experienced is a "rectangularization" of the population longevity curve.) This improvement amounted to "grabbing the low-hanging fruit," since most of the advance took place among our prenatal and infant (pediatric) population where the leverage was greater than in a comparable geriatric cohort. Also, public health policy benefitted substantially from better plumbing and pure drinking-water supplies, not to mention the invention of penicillin and other antibiotics, as well as vaccines, to counteract premature death due to microorganisms and parasites in our children. Older folk suffer much more from fatal chronic diseases (like Heart Disease, Cancer, Stroke, Alzheimer's, Parkinson's, etc.) than fatal acute infectious diseases (pneumonia). Can we hope to achieve a similar percentage improvement over the next century? Unfortunately, the simple answer is "No." The GRG believes that our quick medical solutions have already been applied. It remains for us to figure out much more about the aging process itself than we have so far, which doesn't seem to be a topic of strong interest among doctors teaching medical students in universities today. Stay tuned to this website for periodic progress reports, especially if the situation changes. -- Steve Coles]

Sources: Robert Young and The Gerontology Research Group at UCLA