NEWS: The Stem Cell-Cloning Plot Thickens: Ethical Challenges Get Cloudy with the Entrance of Parthenogenesis
by
Brendan A. Maher
The Scientist,
Vol. 16, No. 4, p. 19 (February 18, 2002)
Excerpted with permission [*],
Please click for the full article 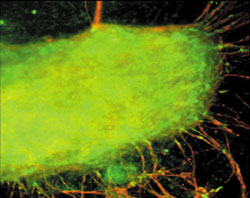 <Photomicrographic Image of a neuron;
some of these controversial stem cells exhibited, among other cell types, neural differentiation.>

Add this to the pot of stem cell sources creating a political stir: parthenogenesis, creating embryos from unfertilized eggs. Unlike the cloning issue, which has a defined division, the ethical question regarding parthenogenesis may have all the earmarks of being ambivalent.

So far, the US Government has already placed restrictions on Federal funding for new stem cell lines derived from in vitro fertilized embryos, and the Senate is deliberating over a ban on cloning that may block stem cells derived from somatic cell nuclear transfer. But, last month parthenogenesis as a stem cell source was suggested briefly in Science [1], which may add a new wrinkle to the debate. Researchers from Wake Forest University School of Medicine in North Carolina teamed up with the oft-controversial Worcester, MA, biotech firm Advanced Cell Technology [2,3] to create embryos from the unfertilized eggs of Macaca fascicularis, the crab-eating or long-tailed macaque.

Some feel that the ambiguous nature of these virginally derived stem cells could help such research escape scorn. Ruth Faden , Executive Director at the Bioethics Institute, Johns Hopkins University, says, "For some people, parthenogenesis, as a source of potential stem cells, is being mulled over as a way to 'square the circle' - as a way to get around the personal moral objections and political considerations that many find deeply troubling."

The researchers proposed it - if applied to humans - as, "an alternative to human therapeutic cloning," that, "may circumvent the ethical concerns voiced by some, positively impacting the debate in stem cell research."[1] One researcher calls such claims, "a bit disingenuous," but says that the process does add another important tool to biomedical research, even if it is one that may only benefit women. [ Editor's Note: There may be a work-around for this problem, as was suggested by scientists at ACT by using the nuclei of two sperm cells before triggering the parthenogenic stimulus.]

Deriving Stem Cells from the Patient

(1) First, hormonally hyperstimulate the ovaries to produce a sufficient number of eggs;

(2) Extract the eggs from the donor;

(3) Inhibit a protein kinase in each egg,

(5) Give each egg a small electric shock. These eggs are in mature Metaphase-II Phase of the cell cycle, and this will recruit the polar body -- the haploid part of the genome that was going to be thrown away. This step is the essence of achieving parthenogenesis;

(6) This recruits the polar body back in, so the egg becomes diploid and begins to undergo mitotic divisions with a full complement of chromosomes;

(7) After about two weeks, the cells aggregate into a ball-shaped blastocyst;

(8) Harvest the Inner Cell Mass within the blastocyst;

(9) Disassemble the cells of the inner cell mass that will become the pluripotent stem cells that are genetically identical to the egg donor and can be cultured in vivo;

(10) Add appropriate cytokines to differentiate these cells into a few different types of adult tissues that are required by the patient;

(11) These cells can then be amplified in tissue culture by a factor of 100,000. Industrial-strength process control is needed here;

(12) These cells are then injected back into the patient as an "autologous tissue" transplant hopefully without fear of acute rejection by Killer T-cells, had they come from an arbitrary donor.

[ Editor's Note: Remember that stem cells are not like Red Blood Cells in which there is a universal donor (Type O) for all blood transfusions that can be prepackaged and refrigerated by the Red Cross for future use. The HLA-typing of stem cells for histocompatibility is extremely complex and powerful immunosuppresive drugs with severe side effects are frequently administered for life for a major organ transplant that was not obtained from an identical twin. Obviously, most of us do not have disease-free identical twins who are ready, willing, and able to give up spare parts for our sakes. Even trickier is the idea that embryonic stem cells may have a different HLA profile with embryonic surface antigens compared with fully-differentiated adult cells that are derived from them. What would T-cells think of embryonic stem cells? Maybe they would be recognized as cancer cells and killed off immediately? That's the logic behind differentiating the cells in vitro first before injecting them into the patient. However, the idea of stimulating preexisting adult stem cells in situ using specialized cytokines has its merits and this approach should not be ignored. The rate limiting step in this approach is the discovery and synthesis of the required tissue-specific cytokines. This hopefully will occur in the next few years as we uncover the requisite genes using microarray gene-expression technology.]

Not created by the union of a man and woman, Dr. Vrana says that the embryos -- which he prefers to call " parthenotes" -- are self-limiting. "In other words, they 'konk out' at the blastocyst stage. They fail to implant correctly, so they couldn't become a fetus and 'go to term'." And, while the egg cell contains the same genetic material as its donor, further experiments will hopefully determine the effects of chromosomal crossing over and gene imprinting events that might occur during normal gametogenesis.

Parthenogenesis was not addressed in the Bill authored by US Rep. Dave Weldon (R-FL) banning all human cloning. Weldon says. "parthenogenesis would not fall under the restrictions because the Bill pertains only to cloning by Somatic Cell Nuclear Transfer." "If they produced a live monkey, I might consider amending the language in my bill, or introducing a bill barring it from being done in humans," he says. Regardless of legality, right-to-life groups may still be opposed.

Speaking on her own behalf, Dr. Elizabeth Blackburn, cell biologist and member of the President's Council on Bioethics, says that these blastocysts are really no different from those made by therapeutic cloning or in vitro fertilization. "This is simply another wrinkle that I don't think, profoundly in any way, changes the nature of the debate."

Dr. Vrana agrees that this will not end the conflicts over such research. "I don't think it solve the problem. It just produces another alternative. It expands the discussion." And that discussion saw a lot of action in January, arguably a big month for unpublished results involving stem-cell research [4,5]. Those vehemently opposed to stem-cell and cloning research hitched their wagon to a so-called " Ultimate Stem Cell" derived from adult bone marrow. Opponents to embryonic research heralded it as mounting proof that embryos need not be destroyed, much to the chagrin of the researchers involved.

Although parthenogenesis is deemed acceptable by pending cloning bans, scientists face a Pyrrhic Victory. "I think what we're at risk of here is when somebody latches on and says, 'Oh, we don't need embryo research.' I should certainly hope that doesn't happen with us," says Vrana. In addition to unforeseeable limitations in the research, parthenogenesis-derived stem cells may only benefit potential egg donors. "Remember too that parthenogenesis is only going to work for women in terms, at least, of our technology right now if we're talking about autologous transplantation," says Faden. "It is an intrusion of a profound nature into women's bodies to retrieve eggs. So, it raises issues of concern to people who are worried that women could be exploited." Regardless of the merit and meaning that ethicists and legislators alike will attach to parthenotes, scientists view them as a tool that could advance the understanding of human development and the true potential of stem cells to human health.

Dr. Elizabeth Blackburn says, "The whole science of stem cells is in a state of ignorance.

Q: Where can we go with all of this?
A: Not enough is known.

Q: How do we find out?
A: We have to do the necessary experiments, i.e., to do the hard work to find out.

You can't just make an arm-chair guess about what will work and what will not.

In the end, the cells are going to tell us. The cells will have the last word."

Brendan A. Maher can be contacted at bmaher@the-scientist.com .