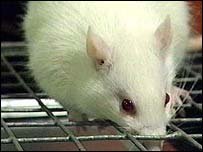 “Suppression of Aging in Mice by the Hormone Klotho,”

2. Department of Molecular Physiology and Biophysics,

* To whom correspondence should be addressed:


A defect in Klotho gene expression in mice accelerates the degeneration of multiple age-sensitive traits. Here we show that overexpression of Klotho in mice extends life span. Klotho protein functions as a circulating hormone that binds to a cell-surface receptor and represses intracellular signals of insulin and insulin-like growth factor-1 (IGF1), an evolutionarily conserved mechanism for extending lifespan. Alleviation of aging-like phenotypes in Klotho-deficient mice was observed by perturbing insulin/IGF1 signaling, suggesting that Klotho-mediated inhibition of insulin/IGF1 signaling contributes to its anti-aging properties. Klotho protein may function as an anti-aging hormone in mammals.

A protein named after the Greek goddess who spins life's thread has joined the short list of ways to extend a mouse's natural lifespan. While lab mice can live about two years, many of the mice engineered to overproduce this protein, called Klotho, have celebrated third birthdays. The mutant rodents represent a rare case of a single gene substantially influencing life span in mammals.


The work, performed by Makoto Kuro-o of the University of Texas Southwestern Medical Center in Dallas and his colleagues, builds on research he published eight years ago. Then, he found that mice lacking Klotho died young, after developing arteriosclerosis and other age-related conditions much earlier than normal (Science, November 7, 1997, p. 1013). Still, many doubted that extra Klotho would lengthen life span. In the new study, Kuro-o and collaborators created mice overexpressing the gene for Klotho. Males making the most extra Klotho lived, on average, 30 percent longer than did normal males, and the mutant females survived 20 percent longer than normal counterparts, the team reports August 25th in Science. As with other lab animals coaxed to have lengthy lifespans, the altered rodents had fertility problems. They produced about half the expected number of offspring. In addition, male Klotho mutants looked like animals at risk for diabetes. Their blood contained more insulin than that of normal mice. This suggested that the male mutants were somewhat resistant to insulin -- a symptom, in extreme forms, of diabetes. Klotho's effects on insulin could connect the protein to a hot story in aging research. Suppression of signaling by insulin and the related hormone Insulin-Like Growth Factor-1 (IGF-1) extends life span in many species.


Klotho "ties in beautifully" with the IGF-1 story, says George Martin, a gerontologist at the University of Washington in Seattle. Others are less sure. The link is "tenuous," says Luciano Rossetti, Director of the Diabetes Research Center at Albert Einstein College of Medicine in New York City. He points out that female mice with extra Klotho have normal insulin action but live substantially longer.


Whatever Klotho's ultimate mechanism, the work raises the intriguing possibility that lifespan can be extended despite or perhaps via mild insulin resistance, a trait long considered deleterious to longevity. Researchers would now like to know if Klotho levels in humans correlate with lifespan – for example, if the blood of centenarians is swimming with it.

"Hormone Extends Life of Mice: Research Could Lead to Drugs to Boost Human Longevity"
by
Rob Stein, The Washington Post


August 25, 2005 -- Scientists have identified a hormone that significantly extends the lifespan of mice, a discovery that could mark a crucial step toward developing drugs that boost longevity in people. The hormone is the first substance identified that is produced naturally in mammals, including humans, and can extend life span -- a long-sought goal in the intense effort to help people live longer.


Much more work is needed to study the substance, and investigate whether the hormone or a similar compound would be effective and safe in people, experts cautioned. But the discovery opens highly promising avenues for research and provides tantalizing new clues toward deciphering the basic biology of aging.


"This is a significant discovery. It's an exciting paper," said Anna McCormick of the National Institute on Aging, which helped fund the new research, published on-line yesterday by the journal Science. "It's definitely the way you would go about designing molecules that would promote healthy aging and longevity in people."


Makoto Kuro-o of the University of Texas's Southwestern Medical Center at Dallas, who led the research, said, "This could provide a key to understanding the molecular mechanisms of aging and opens up new areas to the potential therapy for multiple age-related diseases in humans." The discovery was triggered by a study Kuro-o and his colleagues published in 1997, which identified a gene in mice that, when damaged, caused the animals to experience all the hallmarks of aging in humans -- hardening of the arteries, thinning bones, withered skin, weak lungs -- and to die prematurely. They dubbed the gene Klotho, for the Greek goddess who spins the thread of life.


Suspecting the gene may play a role in regulating life span, Kuro-o and his colleagues genetically-engineered mice with overactive Klotho genes. In the latest experiments, they found that these animals lived an average of 20 to 30 percent longer than normal -- 2.4 to 2.6 years vs. a normal life span of about two years -- without any signs of ill effects, according to the new report "The extension of life span is widely accepted as a reliable marker for the suppression of aging," Kuro-o said. "This shows the Klotho gene regulates aging." The researchers then identified a small protein component, called a peptide, that the gene produces and found it circulating in the animals' blood at double the normal level.


After isolating and purifying the substance and reproducing it through genetic-engineering techniques, the researchers injected the substance into normal mice. Tests on those animals, combined with experiments involving cells in the laboratory, indicate that the substance modulates a crucial biological pathway involved in a panoply of basic metabolic functions that has become the focus of aging research in recent years.


"It's a pathway that has been conserved by evolution that has been found to play a key role in regulating life span for flies, worms, mice and probably humans," Kuro-o said. Studies, for example, suggest that damping down this pathway -- known as the insulin/insulin-like growth factor-1 signaling pathway -- may be the mechanism that extends longevity in animals that are fed an ultra-low-calorie diet. The Klotho hormone appears to have a similar effect, Kuro-o said. "Our work shows that the Klotho gene is an aging-suppressor gene," he said. Other researchers said the findings were remarkable because no one had previously found a naturally-occurring hormone capable of extending the lifespan of a mammal.


"You have lots of ways to shorten the life of an animal, but it's hard to get an animal to live longer," said George M. Martin of the University of Washington, who is Scientific Director of the American Federation for Aging Research. "You can kick a radio to make it not work so well, but it's hard to make it work better. It's quite a wonderful discovery."


Kuro-o and his colleagues plan to inject the substance into normal mice to see whether it extends their lifespans and to measure the substance in humans to determine whether levels of the protein are correlated with longevity. Previous research has shown that humans have the protein in their blood, and that people with a certain variation of the gene are prone to age-related diseases such as heart attacks, strokes, and osteoporosis.


Scientists will have to determine whether the protein can be produced in sufficient quantities to use it as a drug. It may turn out that other substances that mimic the protein's effects would also work or be safer, Kuro-o said. "That might be more practical," he said. Kuro-o and others cautioned, however, that agents that appear effective and safe in mice often produce complications in humans. The hormone, for example, appears to decrease the effectiveness of insulin, which could limit its usefulness.


"It appears to play a role in the same pathway in people, but that doesn't necessarily mean it's going to be as straightforward to extend lifespan in people as it is in mice," said Valter Longo of the University of Southern California. "But this adds a new component to our picture and perhaps a component that could extend life span with few ill effects."


Beyond the possible clinical applications, other researchers said the finding underscores the growing understanding of the basic biology of aging. "Papers like this are filling in the pieces of the puzzle that will explain the evolutionary biology of aging," said L. Stephen Coles of the UCLA School of Medicine.

Scientists in the United States have discovered a gene that can keep mice alive for 30 percent longer than normal. They say the gene has a key role to play in many of the processes related to aging. Because humans have a very similar version of the gene, the hope is that it will show a way to improve our declining years.

The gene studied in the new research is called Klotho, named after a minor Greek goddess who spins life's thread. The gene certainly seems to do that. Mice -- and people -- with defective forms of the gene appear to age prematurely. Now researchers have shown that by boosting the activity of the gene, they can extend the natural lives of male mice from two to three years. The effect is not quite so strong in female mice.

"It could be one of the significant steps for developing anti-aging therapy," Dr. Makoto Kuro-o, Assistant Professor of Pathology at the University of Texas Southwestern Medical Center and senior author of the study, told Science magazine. Klotho seems to delay many of the effects of old age, like the weakening of bones, clogging of the arteries, and loss of muscle fitness. This is important for those researching the causes of aging, whose intention is not so much to prolong life as to improve the quality of our final years.


But there may be downsides with Klotho. The long-lived mice in the new experiments tend to be less fertile. And the gene may also predispose people to Diabetes. The trick for researchers will be to find ways of getting the life-enhancing results of Klotho while avoiding the drawbacks.