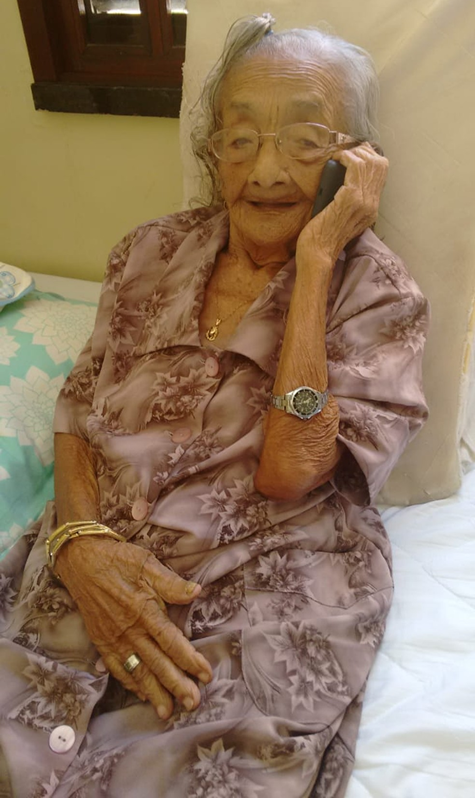 Francisca Celsa dos Santos was born in Cascavel, State of Ceara, Brazil, on October 21, 1904 (claims October 22, 1904) to Raimundo Gertrudes dos Santos and Maria Antonia do Espirito Santo. She worked in household chores, and later as a merchant selling lace cloths. Before 1935, she married Raimundo Celso (1905-1979) in church. The couple had six children: Maria Celsa (born 1935), Raimundo Celso (1936-deceased), Jose Celso dos Santos (1939-deceased), Gerson Celso dos Santos (1940-deceased), Maria Nazete (born 1946), and Maria Zelia (born 1948). Before the birth of her last child, on July 31, 1948, the couple went to the Pacajus' civil registry office to get officially married. She lived in Pacajus for many years after her marriage.

Shortly after Francisca's husband's death on September 4, 1979, she moved to Messejana (the metropolitan area of Fortaleza) to live with her daughter Maria Nazete. At the age of 85, she experienced severe health problems that required hospital care, but, by her request and with family consent, she decided to be treated at home by her daughter-in-law. After many prayers and family care, she recovered. Since 2012, she can no longer walk. Today she is monitored by her grandson, Dr. Luziney Monteiro. She has been the oldest verified living person in Brazil, retroactively since the death of Luzia Mohrs (Sister Maria Electis) (1904-2017) of Germany/Brazil. On October 4, 2019, she surpassed the age of Maria Gomes Valentim (1896-2011), becoming the oldest person ever from Brazil. She is currently the oldest living person in South America and the third-oldest living person in the world, according to the GRG WORLD SUPERCENTENARIANS RANKINGS LIST. She is also the second-oldest validated person in Latin American history, behind Maria Capovilla (1889-2006) of Ecuador.

Francisca has always demonstrated her love for children and family. At 115 years old, she is debilitated with rare moments of lucidity, but without health problems, and doesn't use any medication. Her diet now is simple – milk and food supplements. Some time ago, she loved drinking soda and eating tapioca. Her granddaughter, Fransilvia, is now her caretaker, and she says that taking care of Francisca is easy. As of June 2020, three of her daughters are still alive: Maria Celsa, aged 85; Maria Nazete, aged 74; and Maria Zelia, aged 72.

Robert "Bob" Weighton of the UK, 112, recognised as World's Oldest Man by the Guinness World Records 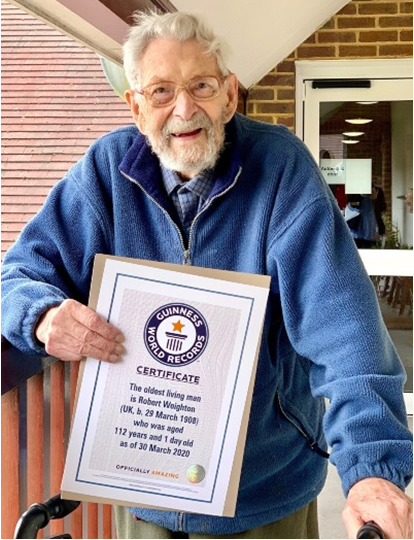 Apr. 4, 2020: Guinness World Records has officially awarded the "oldest living man" title to 112-year-old Robert "Bob" Weighton of England, UK. Due to the COVID-19 pandemic, Mr. Weighton, who lives in Alton, Hampshire, was not able to receive a visit from a GWR official. Instead, he was presented with his certificate by the staff at the assisted living facility where he resides. He was also given a rendition of "Happy Birthday" to celebrate turning 112 the previous day. Mr Weighton, was born in Kingston-upon-Hull, Yorkshire, England, UK, on March 29, 1908. After graduating, he took up a marine engineering apprenticeship. After qualifying, Weighton moved to Taiwan to teach at a missionary school, although he first had to spend two years in Japan learning the language. In 1937, Weighton married his wife, Agnes, a teacher he had known since they studied together in England. After marrying in Hong Kong, they returned to Taiwan, where their first child, David, was born. The family decided to return to the United Kingdom in 1939, but were diverted to Toronto, Canada, due to the onset of the Second World War. While in Canada, the couple had two more children, Peter and Dorothy. Weighton later moved to Connecticut, United States, and worked in a factory that made aeroplanes for Britain to help them fight the war. He also worked closely with the American Secret Service. He later moved to Washington, and then back to England after the war had ended, eventually taking on a teaching position at City University, London. Weighton and his wife moved to Alton, Hampshire, England in 1973. Agnes died in 1995, and their son, Peter, died in 2014. Robert Weighton apparently became the world's oldest living man following the death of 112-year-old Chitetsu Watanabe of Niigata Prefecture, Japan, on February 23, 2020. This was confirmed March 30, 2020 by Guinness World Records, after an investigation.

The GRG considers the Robert Weighton case validated as of Apr. 4, 2020. However, the case is not yet ranked because there are several months' worth of older female cases in process and to prematurely add this case to the GRG World Rankings due to gender alone would be selection bias, and not what the scientific method supports. Therefore, the case is considered individually validated but not yet among the GRG World Rankings. In short, he is currently too young at the moment to be ranked within the context of the GRG WSRL. If Mr. Weighton is still alive when his proper case processing turn comes, he will then be put on the GRG World Rankings at the appropriate time. 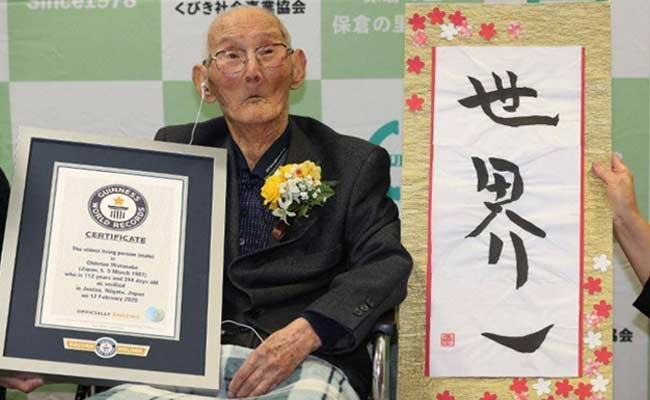 Feb. 25, 2020; The Gerontology Research Group is saddened to inform that the world's oldest living man, Chitetsu Watanabe, has passed away in Japan on February 23, 2020 at the age of 112, as reported by the Niigata prefecture government. Watanabe, who was residing at a nursing home in Niigata, was born on March 5, 1907. He was officially confirmed by the Guinness World Record as the oldest living man on February 12, 2020. According to the Guinness World Records, he was born in Niigata and later moved to Taiwan in order to work on a sugar cane plantation. After his return to Japan he worked as an employee at an agricultural office in Niigata until his retirement. Watanabe died before he could claim the title of the oldest man ever. That record is held by Jiroemon Kimura of Japan (1897-2013) aged 116 years and 54 days. In an interview for a local newspaper in January 2019, Watanabe said his secret to longevity was "not to get angry and keep a smile on your face."

Emilio Flores Marquez, validated as the World's Oldest Man, by the GWR 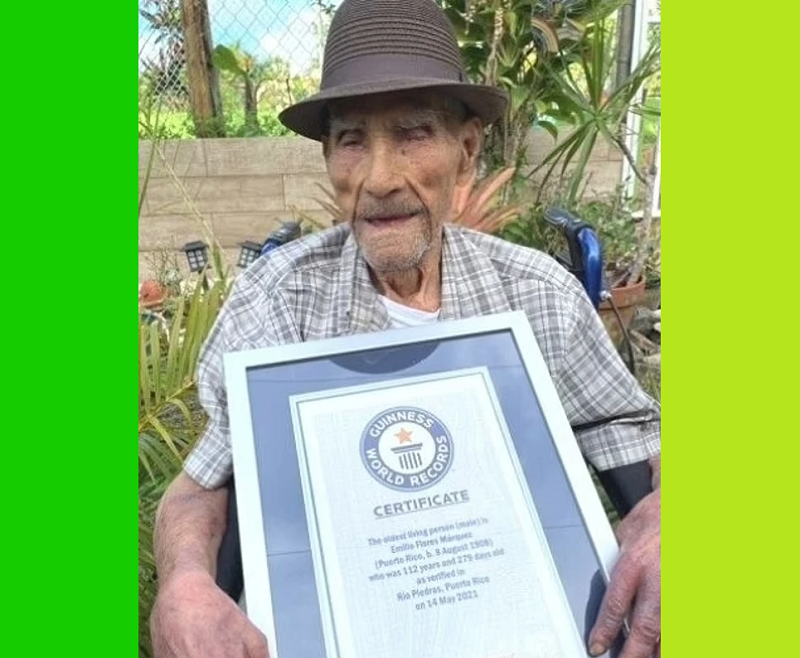 Emilio Flores Marquez was born in Carolina, Puerto Rico on August 8, 1908, to parents Alberto Flores and Margarita Marquez. The second-oldest of eleven children, at age 104 he could still easily recall the names of nine of his siblings (his oldest sister Maria died as a child): Angelina, Mercedes, Aurora, Joaquina, Cecilia, Rosa, Lino, Miguel and Jose. He attended school for three years, before he began helping his father on the family's sugarcane farm, where he helped his father water the compost. He also transported the sugarcane in wagons, earning $1.12 a day. As the first-born child in his family, he also was responsible for doing many of the household chores and taking care of his 9 younger siblings. In 1935, He married Andrea Perez De Flores (1918-2010), with whom he had four children. The couple were married for over 75 years before her death in 2010 at the age of 92. Two of his children were deceased as of 2013. When asked for his secret to his longevity, he responded "My dad raised me with love, and taught me to love everyone. He always told me and my brothers and sisters to do good, to share everything with others. Besides, Christ lives in me!" There was also a history of longevity in his family: his sister Joaquina Flores Marquez (1916-2018) lived to be 101 and his brother Miguel Flores Marquez (1920-2017) died two months before 97 in New Jersey, USA.

Emilio Flores Marquez currently lives with his children Tirsa and Emilio in Rio Piedras, San Juan, Puerto Rico, at the age of 112.

Click here to return to the GRG News page