Here's an article about his death:

Here's an article about his 112th birthday earlier this year in February with some biographical information about him:

His Photo Gallery can be found here:

For the second time in two months, the World's Oldest Person turns 116. This time, it is Susannah Mushatt Jones, of Brooklyn, New York, USA, who turned 116 on July 6th.

On her 116th birthday, Guinness World Records had announced that they recognized Susannah Mushatt Jones as the world's oldest person titleholder:

Here are some articles covering her death:

Gerontology Research Group's Director of Supercentenarian Research and Database Division, Robert Young, reports that Susannah Mushatt Jones of Brooklyn, New York City, is now the new World's Oldest Person. She is less than one month away from her 116th birthday.

Gerontology Research Group was saddened to receive the news from the family that Antonio Gerena Rivera had passed away on June 2, 2015, at the age of 115 years and 14 days.

On May 23, 2015, in Inkster, Michigan, Jeralean Talley, World's Oldest Person, celebrated her 116th birthday. Here are a couple of news stories covering her birthday:

Detroit Free Press (dated May 24th) including pictures of her 116th birthday
http://www.freep.com/story/news/local/michigan/2015/05/24/worlds-oldest-person-celebrates-turning-inkster/27890383/

On May 19, 2015, Miami (Florida) resident Antonia Gerena Rivera, born in Puerto Rico on May 19, 1900 and recognized by Guinness World Records and the Gerontology Research Group as the world's current 5th oldest living person, turned 115 years old. Because she is a member of the Jehovah's Witness church, the family does not "celebrate" birthdays, and thus there has been virtually no news coverage of this woman's existence.

While the family of Antonia do not "celebrate" birthdays, they do wish to get her life story out, to "celebrate" her life history. This woman was born in Puerto Rico but has lived in South Florida for quite some time. Longevity runs in her family. A brother, Frank died at 105 and a sister, Maria, at 103. The oldest daughter passed away at age 92 in 2010. 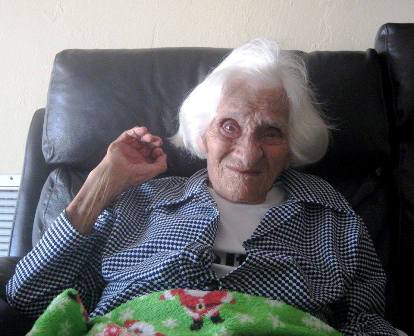 Antonia Gerena Rivera's age was verified by the Gerontology Research Group, as of December 23, 2010. Antonia was listed in Guinness World Records 2015 as the 7th-oldest living person worldwide. Since that time, she has moved up to 5th in the world rankings.

Antonia already holds the records for:
--Puerto Rico's oldest woman ever (and second-oldest person behind Emiliano Mercado Del Toro, 1891-2007, who holds the overall island record at 115 years, 156 days)
--Florida's oldest resident ever. Carrie White's claim to 116 in 1991 was later retracted when a subsequent investigation cast doubt upon her age

Her photo gallery can be found here: https://grg.org/Gallery/1900Gallery.html#Antonia_Rivera

April 6, 2015; GRG received the news from the family of Gertrude Weaver that she passed away this morning at the age of 116.

This was covered in the news:

The title of the World's Oldest Person passes on to Jeralean Talley, 115, of Michigan, United States

While Mrs. Gertrude Weaver's reign as World's Oldest Person was only for 5 days, it was not the shortest record ever on record. Emma Tillman, 114, reigned for only 4 days back in 2007 before her own death.

April 3, 2015; GRG was saddened to learn of the passing of the World's Oldest Person, Misao Okawa, 117, in the morning hours on Wednesday, April 1, 2015, in Japan. Mrs. Misao Okawa had celebrated her 117th birthday last month.

This is one of many media links about her passing:

For more photos of her on her 117th birthday and other photos, please visit her Photo Gallery section here.

She was covered in the media here: