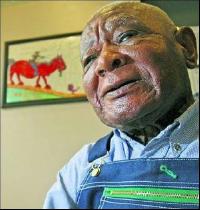 July 22, 2008; Mr. Robert Young, Senior Claims Investigator for the GRG, complains that CNN has provided us with an innocent human-interest story about an artist without proper fact-checking on his extraordinary age claim that seems to have gone without careful journalistic scrutiny (see below for the results of our own investigation). Mr. Young states, "Despite the fact that we have known about this case since 2005, and have advised the local newspapers who called that Mr. Calloway's age was unverified, it appears that certain journalists are determined to transform him into a mythic, legendary character."

So you can decide for yourself, here's the original story from CNN by way of Associated Press followed by our analysis...

Sunday, July 20, 2008; Tuscaloosa, AL (CNN and AP) -- Bent over or sitting at a table, gripping a ball-point pen, marker or crayon, Frank Calloway spends his days turning visions from his youth into lively murals and at 112 years old, the images of his childhood are a window to another time. Drawn on sheets of butcher paper and sometimes stretching to more than 30 feet long, the works mostly show rural agricultural scenes, with buildings, trains and vehicles straight out of the early 20th-Century. And his colorful creations are gaining more attention in the art world. The works by a man who has lived about half his life in state mental health centers will be part of an exhibit this Fall at the American Visionary Art Museum in Baltimore, MD.

His caretakers have suspended sales of his artwork until after the show after finding out that some of his drawings could sell for thousands of dollars. "They are unique in that they are of a rural, agrarian South, and they speak to a time gone by," said Sara Anne Gibson, Executive Director of the Kentuck Museum in Northport, AL, which hosted a month long exhibition of Calloway's works two years ago.

Calloway views art as his job and sits at a table by a window drawing for seven to nine hours a day, usually wearing blue denim overalls and a crisp dress shirt, said Nedra Moncrief- Craig, Director of Alice M. Kidd Nursing Facility, a state home where Calloway lives. "He draws all day long except for the time that he spends in activity and eating his meals," Moncrief-Craig said. "That's what he loves to do."

He was born July 2, 1896, and has lived in mental health centers since 1952, when he was diagnosed with Schizophrenia. Moncrief-Craig said patient confidentiality prevents her from discussing his condition in depth but did say he shows signs of dementia. He lives in the geriatric division of the home on the Bryce Hospital campus in Tuscaloosa.

Details about Calloway's youth are few. He says he remembers growing up with brothers and, as a "little, bitty, little boy," playing under the quilts his mother made as if they were tents. He has no known family left, and there is no record of his ever being married.

He talks frequently about working hard and mentions laying railroad rails, cutting lumber, farming and working for a blacksmith, but there are no records of his life before he entered the Alabama Department of Mental Health and Mental Retardation system. "I couldn't get time to go to school much, stopped in the third grade reader, that's all I could get, third grade reader," Calloway said. "A school teacher put me to drawing a long time ago, drawing pictures." But aside from the occasional drawing, his talent lay dormant until he took an art class in the 1980's and began to draw again, which has continued to this day.

Calloway still has a full head of closely cropped white hair, gets around on his own and goes on excursions and restaurant outings organized by the nursing home, Moncrief-Craig said. "Most people see his age. You know, what I see is his ability, the beauty that he actually puts on paper, that comes out of him and his mind," she said. Calloway's circle of admirers extends outside Alabama.

"There's a presence with him, I'm telling you, that feels angelic," said Rebecca Hoffberger, Founder and Director of the American Visionary Art Museum in Baltimore, which will borrow 18 scrolls from Calloway for an exhibit in October called "The Marriage of Art, Science and Philosophy." Hoffberger said she was charmed by Calloway's personality when she met him this year and equally impressed by his artwork. "I was very dazzled by his choice of color," she said. "Also, there's a rhythm, maybe dictated by the long sheets of paper that he works on, that makes it seem like he's just going on and on, recording the memories of his life." She said Calloway's work is a perfect fit for her museum, whose mission statement describes visionary art as that "produced by self-taught individuals, usually without formal training, whose works arise from an innate personal vision that revels foremost in the creative act itself."

Hoffberger called Calloway brilliant and described looking through notebooks full of numbers he keeps and noticing that there was a definite logical pattern to the strings of figures. There is "an instinctive attraction to math that is so inherent in his work," she said. Rows of numbers line the edges of some of his artwork, and he sometimes stops in the middle of conversations to methodically recite multiplication tables.

Calloway is content being quietly absorbed in his work, but he also enjoys talking if people ask questions, Moncrief-Craig said. He listens intently and responds at length in a deep, gravelly voice as he rocks gently back and forth, often punctuating the end of a story with a soft chuckle and a huge smile that lights up a broad face that has very few wrinkles.

Though he frequently goes on day trips outside the nursing home, Calloway seems to live in a long-gone era, pulling images from that time for his drawings, Moncrief-Craig said. Last year, after a trip to Alabama's Gulf Coast, Calloway decided to draw boats. But the boats are big old riverboats propelled by paddlewheels, not the modern ones he'd actually seen.

Several years ago, when people started showing interest in buying Calloway's art, Moncrief- Craig decided he needed a guardian. Since 2006, Zondra Taylor Hutto has filled that role. The attorney is the Tuscaloosa County guardian, conservator, and administrator for several residents, including Calloway.

Calloway used to give away some of his creations or sell them for $50, but Moncrief-Craig and Hutto have stopped dealing the work since an appraiser said they could be worth thousands. They hope to have more of an idea how much the art should go for after the Baltimore show. Calloway has few expenses that aren't covered by Medicaid, so any profits will go into a special needs trust in his name, so he won't lose his benefits. The money can be used for items such as art supplies that aren't covered by the government. When he dies, the remaining money will go to the state or to the state Medicaid Agency, which has provided his care all these years.

Plans are for Calloway to attend the opening of the Baltimore show. It will be his first trip on an airplane and likely the first time he's left Alabama. Hutto said she looks forward to sharing his work with a wider audience. "His art overcomes boundaries," she said. "People may say, 'Well, he's a folk artist. I don't like folk art.' But if you ever meet him, there is such life in what he creates, and you can't look at one of his paintings without seeing that smile, without seeing that gentle man."

On July 15, 2008, our Senior GRG Investigator from Portugal, Sr. Filipe Prista-Lucas, reported that his investigation, along with information obtained from Mr. Louis Epstein of New York, led him to conclude that Frank Calloway was just 93 years old and not 112!

Based on the information available in this report sent to Mr. Louis Epstein (Frank Calloway, born in Montgomery County, the Son of Sam and Estelle Calloway), I believe I was able to find the relevant US Census matches for him as follows:

Based on the oldest available record (1920), I would therefore say Mr. Frank Calloway is only 93 years old today, having been born in July 1915. In order to complete this case, I copy-and- pasted older matches for his family as follows: