Web Focus on the Chimpanzee Genome 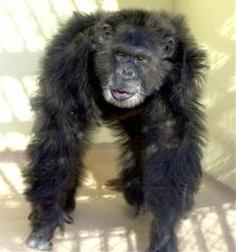 A chimpanzee named Clint provided the genetic sample that was analyzed to produce a full genome sequence.
Unfortunately, Clint died last year, but two of his cell lines have been preserved for further study!


What makes us human? We share more than 98 percent of our DNA and almost all of our genes with our closest living relative, the chimpanzee. Comparing the genetic code of humans and chimps will allow the study of not only our similarities, but also the minute differences that set us apart. Providing a resource for more than just genomics, Nature has presented a special web focus to commemorate the genome of Pan troglodytes. Alongside the first unequivocal fossil evidence of the genus Pan, leading researchers have kindly supplied Nature with previously-unseen film of experiments and observations of chimps in the wild and from world-renowned sanctuaries. Selected films relate to papers published in the chimp genome special issue. Enjoy FREE ACCESS to an incredible gallery of chimpanzee behavior courtesy of Nature and the people behind the science.

TIMELINE: “A Brief History of the Chimp,”

NEWS AND VIEWS: “The Chimpanzee and Us,”

Wen-Hsiung Li and Matthew A. Saunders,

PROGRESS REVIEW: “The Second Inheritance System of Chimpanzees and Humans,”

“A Century of Getting To Know the Chimpanzee,”

“Initial Sequence of the Chimpanzee Genome and Comparison with  the

A Genome-Wide Comparison of Recent Chimpanzee and Human

Revealed by comparative sequencing in chimpanzee,”

The Chimpanzee Genome Is Unveiled


August 31, 2005; The genome of our closest living relative – the chimpanzee – has been released by an international consortium of scientists. The chimp genome sequence, which consists of 2.8 GBP’s of DNA letters, will not only tell us much about chimps but a comparison with the human genome will also teach us a great deal about ourselves. “The major accomplishment is that we now have a catalogue of the genetic differences between humans and chimps,” says lead author, Tarjei Mikkelsen of The Broad Institute in Cambridge, MA.


In keeping with previous studies comparing much smaller portions of the chimp and human genomes, the new comparison shows incredible similarity between the genomes. The average number of protein-changing mutations per gene is just two, and 29 percent of human genes are absolutely identical. What is more, only a handful of genes present in humans are absent or partially deleted in chimps.


But the degree of genome similarity alone is far from the whole story. For example, the mouse species Mus musculus and Mus spretus have genomes that differ from each other to a similar degree and yet they appear far more similar than chimps and humans. Domestic dogs, however, vary wildly in appearance as a result of selective breeding, and yet their genome sequences are 99.85 percent similar. So, most of the differences between chimp and human genomes will turn out to be neither beneficial nor detrimental, in evolutionary terms.


The real challenge then will be finding the changes that played a major role in the evolution of chimps and humans since the two lineages split, [5 - 8] million years ago. Nothing obvious has leapt out of the initial analysis. “From this study, there’s no silver bullet of what makes chimps chimps and humans humans,” says Evan Eichler of the University of Washington at Seattle.

Comparing the two genomes has thrown up numerous candidates for what makes humans different though. One such set came by comparing 13,454 specific genes in the chimp and human genomes, looking for signs of rapid evolution. For each gene, the researchers compared the number of single-letter mutations that alter the encoded protein vs. silent mutations that have no effect.


Silent mutations are possible because most amino acids are coded by more than one 3 letter DNA ‘word’ - for example, proline is coded by CCU, CCC, CCA, and CCG, so a change at the third position makes no difference to the protein.


Comparing the two types of mutations allowed the team to spot genes that have had changes favored by natural selection while taking into account the background mutation rate. And 585 of the genes studied in this set – many involved in immunity to infections and reproduction – had more protein-altering mutations than silent ones. Mikkelsen believes these will be a good place to look for genes that make humans different from chimps.


But comparing genome sequences can only tell scientists so much. Now begins the methodical job of homing in on the promising parts of the sequence and identifying the differences that count. “This is best viewed as an exciting starting point,” says Simon Fisher at the Wellcome Trust Center for Human Genetics at Oxford University. “In the same way that knowledge of our own genome sequence has not automatically led to a full understanding of human biology, so the decoding of other primate genomes will not, by itself, reveal exactly what sets us apart.”


September 1, 2005; Scientists have for the first time published the draft DNA sequence of the chimpanzee, the closest living relatives to humans. Comparing the two species’ genomes could reveal what genetic changes resulted in the evolution of Homo sapiens, researchers say, possibly unlocking some of the oldest mysteries about what it means to be human. But for now, the data is providing few answers, and some new puzzles.


The evolutionary lineages leading to chimps and humans are believed to have separated about [5 - 8] million years ago, a short time in evolutionary terms. “As our closest living evolutionary relatives, chimpanzees are especially suited to teach us about ourselves,” said Robert Waterston of the University of Washington School of Medicine in Seattle, WA. Waterston is Senior Author of the paper comparing the two genomes, published in today’s issue of the research journal Nature.


But sequencing a genome, like piecing together a book in an unfamiliar language, only means finding out what all the letters are, and in what order. It doesn’t mean you understand the book. Although biologists have made major strides in deciphering the language of genetic code to gain such an understanding, they’re a long way from full comprehension. To start exploring the chimp-human difference through the genome, researchers are examining where the letters are changed between the genomes. Using that, they can figure out what types of genes these changes affect, if they know where the genes are and what they do.


A preliminary examination of these changes has revealed that, confusingly, most of the changes between humans and chimps seem to affect genes unrelated to language, intelligence, or any of the special things that we associate with humanity. Rather, most of the changes involve genes affecting our immune and reproductive systems. This actually makes sense, some researchers say, because these are among the fastest-evolving parts of the genome in many animals. Immune systems evolve rapidly because of evolutionary arms races between animals and the pathogens that attack them. The two sexes also undergo arms races of a sort in sexual organisms, leading to speedy reproductive system evolution.


The genetic changes that account for what we think of as our “humanness” seem to be fewer, wrote Wen-Hsiung Li and Matthew A. Saunders of the University of Chicago in the same issue of the journal, commenting on the genome findings. For instance, as is already known, a relatively paltry two “letters” of genetic code differ between humans and chimps in the only gene scientists have directly linked to language, called FOXP2.


Cluttering the picture further is that most the genetic changes between humans and chimps aren’t single-letter changes of that type, the pair wrote. Rather, they are changes known as insertions, deletions, or duplications, which roughly correspond to duplicated or deleted stretches of text in a book. The effects of such changes are often unclear. “Nor is it apparent whether this type of change or the single-letter change has been more important,” Saunders and Li wrote.


What does seem clear, some researchers said, is that these genetic rearrangements contribute to making the chimp and human genomes more different overall than scientists traditionally thought.


“Although the two sequences differ by only 1.2 percent in terms of single-letter changes, duplications, and rearrangements of larger stretches of DNA add a further difference of 2.7 percent,” wrote Evan Eichler of the University of Washington School of Medicine in the same issue of Nature.


An additional reason that all these changes could be hard to understand, researchers said, is that is that many of them may affect genes with no direct influence on bodily functioning. Rather, these genes could simply serve to influence other genes, such as by activating or deactivating them. It is “notoriously difficult” to identify such genes, called regulatory or control genes, according to Saunders and Li.


The chimp sequence was published in the journal by an international group of more than 70 researchers, called The Chimpanzee Sequencing and Analysis Consortium. Several other studies analyzing the data also appear in the journal, as well as the September 2nd issue of the research journal Science.

With respect to the question of which genes define "humanness," in determining our brain function and associated linguistic skills (Broca's Area/Wernicke's Area), timing in embryogenesis is what matters most and only "meta" or control genes (ones that turn structural genes on and off) are what count. But control genes may not reveal themselves by synthesizing conventional mRNA that goes out into the cytoplasm to form secondary control-proteins that must then pass back through the nuclear membrane. Instead, they may only make RNAi (inhibitory RNA) that lives exclusively within the nuclear envelope and doesn't leak out into the cytoplasm, giving it a longer half life, and therefore a more well-controlled concentration gradient for when the promoter section of structural genes that can be turned on and off. So, for example, Oct4, Sox2, and Nanog may be turned on only in early embryogenesis and then turned off permanently with methylation or acetylation of specific histones, so that in adulthood one does not (normally) risk forming a teratoma (with disorganized tissue types, frequently including hair and teeth). Obviously, such is not good for the survival of the species, even if it may not be instantly fatal for the individual.


Finally, it is now clear that when considering million-year intervals, one must come to think of any mammalian genome as a dynamic, churning, volatile collection of DNA-base-pairs with genes constantly being mutated while they "jump around" and longer chromosomal segments being snipped out, duplicated and/or inverted, and spliced back into the genome at random places sometimes on completely different chromosomes. This must be how the process of speciation takes place over evolutionary time (epochal/era time), in response to dramatic changes in the environment that may increase fitness for a few puny creatures like us that may have been considerably less fit for more stable environments. Let's face it -- if we had really well-adapted dinosaurs quietly sneaking around while we were contemporaneously struggling to do our own hunting/gathering, we couldn't fight our way out of paper bag. Those top of the food-chain T. Rex guys (My Grandma, what big teeth you have) would have simply eaten us for lunch, and that would have been it for "How noble a work is man."-- Hamlet W. Shakespeare.]