Panel: The Promise and Pitfalls of Stem-Cell Research 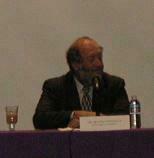 September 24, 2005; The California Science Center in Los Angeles has launched a new speakers program entitled Science Matters to explore challenging current science issues at the forefront of public concern. The premiere program in this series, which began today, looked at the Promise and Pitfalls of Stem Cell Research in the Loker Conference Center. There was an audience of nearly 900 attendees on a Saturday afternoon! Two PowerPoint presentations are expected to appear on the Science Center's website in the near future or by telephone at 213-744-2420.

Dr. Lawrence S. B. Goldstein, Ph.D., Professor of Cellular and Molecular Medicine at the University of California, San Diego, School of Medicine, and a leader in stem-cell research;

Dr. Irving Weissman, M.D., Immunologist, Professor, and Director of the Stem Cell Institute at the Stanford University School of Medicine.

The panel was moderated by Prof. Geoffrey Cowan, Dean of the Annenberg School of Communications at the University of Southern California.

A small special exhibit entitled " Stem Cells and You" will be featured at the Science Center from September 1st through January 2, 2006. It addresses the questions of "What is a stem cell?," "Stem Cells in Medicine," and "Why should we study stem cells?"

The panel discussion kicked-off with a science presentation providing information on stem cells, and describing their special characteristics and potential therapeutic value. Following the science presentation, the panelists reviewed and discussed the stem-cell research issue from different perspectives. Stem cells (both embryonic and adult varieties) hold great promise to cure a variety of devastating human ills, like Alzheimer's Disease, spinal-cord injuries, Diabetes, cancer, and others. Yet, due to the source of stem cells, the public is passionately divided on whether stem-cell research should proceed at all. Bypassing Federal funding, the voters of California passed a proposal (Prop. 71) allocating State funds for just such research. The successful passing of this proposition doesn't solve the basic question, but does bring it into sharper focus -- What are we going to do to further explore the tremendous potential healing power of the stem cell? Exactly what is a stem cell, anyway? What did Californian's just vote on, and What are the potential implications of this measure? This forum was designed to address these issues, as well as offer different, sometimes conflicting, expert opinions on: Who should direct and review such science research? Is there a better way to harness the power of the stem cell? What does the public needs to know about this issue?

[ Editor's Comment: Surprisingly, there was very little conflict raised by the audience during the 20-minute Q&A session, as one might expect, given its controversial nature and the fact that audience was so large. However, everybody present seemed to start from the assumption that Prop. 71 was a good thing, and that only a few remaining items needed to be fine tuned.

Sen. Ortiz mentioned privately that she thought that the combined law suits claiming that Prop. 71 was unconstitutional (sic) and now scheduled to be deliberated by the Alameda County Superior Court would be settled in favor of Prop. 71 before the end of the year. After that, the bonds will be unencumbered by these lawsuits and legally issued to the public for purchase, so we can get on with the process of funding grant proposals from researchers. The last six months of legal delay have been an embarrassment for all concerned.

Sen. Ortiz also mentioned that her California Senate Bill No. 18 ( Reproductive Health and Research) has been passed by both the Senate and the Assembly earlier this month and is awaiting Gov. Arnold Schwarzenegger's signature before becoming law.]

The Science Center plans to hold three Science Matters programs annually (Fall, Winter, and Spring) at on Saturday afternoons. The two programs for next year, which will also have accompanying exhibits, will focus on:

How do we ascertain when life ends? With technological advances, clinical determinations of life and death have become more finely tuned. Yet, defining the limits of life continues to be a controversy played out in hospitals everywhere. In this program, scientists, physicians, and ethicists review various ways of measuring life, and discuss related legal, ethical, and cultural aspects of this question.

For the price of $30,000 one can clone one's cat, while for $50,000 one can clone one's dog. Scientists and ethicists explain the current science of cloning and what's possible in the near future. In this light, policy makers, scientists, and ethicists discuss the responsibilities, obligations, and implications associated with reproductive cloning of animals and humans.

The California Science Center and IMAX Theater are located in historic Exposition Park just west of the Harbor 110 Freeway at 700 State Drive, Los Angeles. The Center is open daily from [10 AM - 5 PM] (except on Thanksgiving, Christmas, and New Year's Day). Admission to the exhibits is free. For recorded information, including IMAX show times, call: 323-SCIENCE (323-724-3623). IMAX ticket prices range from $[4.75 - 8.00]. For advance ticket purchases, group rates, or to make free reservations for any visiting group of 15 or more (required), call 213-744-2019. Parking is available in the guest lot at Figueroa and 39th Street at $6 per car ($10 for buses or oversized vehicles). Both the Science Center and IMAX Theater are wheelchair accessible. For further information, please visit the Science Center website at www.californiasciencecenter.org.